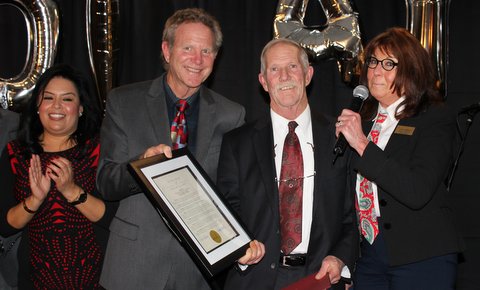 Some people know what they want to do early on in life. Take Blake Andros, owner of Blake’s Auto Body. At 16, he waited six weeks for a simple paint job on his motorcycle and figured he could do it better. At 19, he left college to open his first collision shop in San Francisco. With most of his clientele coming from Marin County, he moved back over the bridge to become the Body Shop Manager of a Chevrolet Dealership in Corte Madera.  Five years later, Blake opened Blake’s Auto Body, San Rafael. That was 35 years ago.

Today, Blake’s has grown to 92 employees company-wide, shops in Novato, San Rafael, Santa Rosa and Rohnert Park, dozens of award-winning 30-second TV spots and thousands of satisfied customers  (check out the website: http://blakesautobody.com/).  It’s easy to see why Blake’s Auto Body and owner Blake Andros have earned recognition as the NCOC 2014 Large Business of the Year.  A wealth of community contributions and commitment to the local economy through a growing and trained work force are among best business practices employed by Blake’s Auto Body.

“Blake and all who work at Blake’s exemplify that investment in business, strong customer service and attention to quality work and warrant their recognition as the 2014 Large Business of the Year in Novato,” said Chamber CEO Coy Smith. “We’re proud to call them Chamber partners.”

Pacheco Ranch is the oldest Mexican Land Grant--deeded in 1840-- in continuous family possession and still engaged in agriculture.  Pacheco Ranch Winery today is home to and managed by the Founder’s great-great-grandson, Herb Rowland and wife Deb Rowland.

Ignacio Pacheco received a Land Grant for his services to the Mexican Government as the head of the customs house in Monterey, California. He was originally given the Agua Caliente Rancho grant in Sonoma, which he deemed “unsuitable for agriculture” and later exchanged it for the Rancho San Jose grant which consisted of 6,680 acres in what is now Marin County. Today, Pacheco Ranch is comprised of roughly 70 acres of the original Rancho San Jose Land Grant.  (More history can be found on http://pachecoranchwinery.com/history/.)

In the late-1960s Herb’s father and mother,  Herb Sr. and Frances, arranged a land deal that parceled about 1,000 acres of land in Indian Valley including the College of Marin and Marin County’s open space district. The remaining 100+ acres in Indian Valley were traded among the Pacheco heirs, giving the Rowlands sole ownership of Pacheco Ranch, located west of Hwy. 101 on Alameda del Prado.

At the time young Herb was learning about wine making as a UC Davis student, the Ranch land was determined a ‘dead match’ in soil composition and temperatures to Napa’s  Rutherford vineyards--perfect for cabernet sauvignon grapes. One thousand vines were donated by family friend Rodney Strong, loaded in a pick-up bed in Napa and planted by a small band of family and friends one summer weekend in 1969.

The first crop was harvested in 1973 and merged with grapes from Quail Hill Vineyard in Terra Linda to produce wine for Napa’s Cuvaison Winery. In 1978, the Rowlands committed further to their viticulture expansion and produced the first vintage in 1979.  The winery holds the distinction of Marin County’s first, and oldest, estate-bottled wine.

Today, the land yields an annual average of 1,200 cases. It can be as low as 500 or high as 1,500 “depending on Mother Nature,” Herb noted. “The best practices start in the vineyard. We dry farm. We don’t irrigate, don’t use pesticides or herbicides. With a southeast-facing vineyard, there wasn’t much we had to do.”

For decades, Pacheco’s annual community donations have benefitted countless Novato school fundraisers, Chamber Leadership Novato events (Deb is a graduate of the class of 1993), weddings, Novato’s Paint the Town Red birthday party and wine pours at past Novato Art, Wine & Music festivals.
“We like to make the ranch a benefit to community,” said Deb.

The legacy of Pacheco Ranch Winery? “We took a beautiful thing and have tried only to make it better,” said Herb.